The Noun Project is an amazing site for vector icon graphics.

It is also a Microsoft add-in for PowerPoint. This is a web based add-in (vs. local machine install). In PowerPoint, go to the INSERT tab, and click the STORE button.

On the Store tab, search for NOUN PROJECT and install. 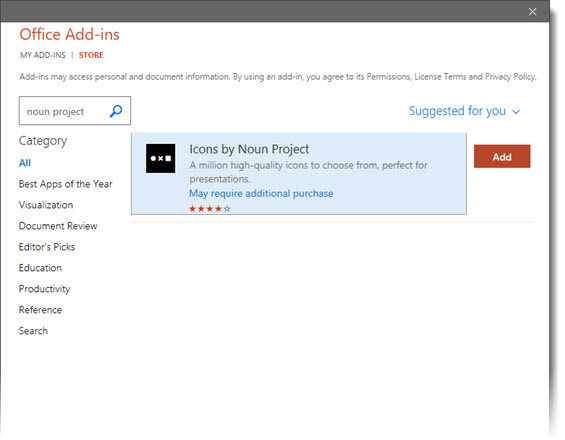 On the INSERT tab, the NOUN PROJECT button is available. Click to open the app pan and have instant access to over 1 million icons direct without leaving PowerPoint.

Everyone can access the free version, which are .PNG images, where each slide attribute the icon’s designer and icons are only added to a slide, they cannot be downloaded as separate art files. For TLC Creative we opted for the $40 annual subscription which does not need attribution, external art files can be downloaded and we can choose between SVG and PNG files every time we use. PowerPoint recently added its internal vector icon library (insert > icons), but if a presentation needs to expand beyond these, The Noun Project is something that can be found in many designers toolbox, and now it can be added directly in PowerPoint.