Using Morph As Part of the Slide Design

Morph is one of the most powerful animation/motion tools in PowerPoint. Most instances of morph I see leverage Morph for simple movement of content. Here is an example from one of the TLC Creative design team where morph is used for elements that make up each slides background styling and provide movement within the presentation that is not directly moving top level content.

There are 5 slides in this demo, and no on-slide animation, just Morph transitions.

As with all Morph effects, all content must be at the slide level. Content on Master layouts cannot be a part of the morph effect. And Morph relies on content being on the slides before and after the current slide (red arrows show images from slide 1 and where they go on slide 2. Yellow star is content end position from previous slide. Green stars are content start position for next slide). 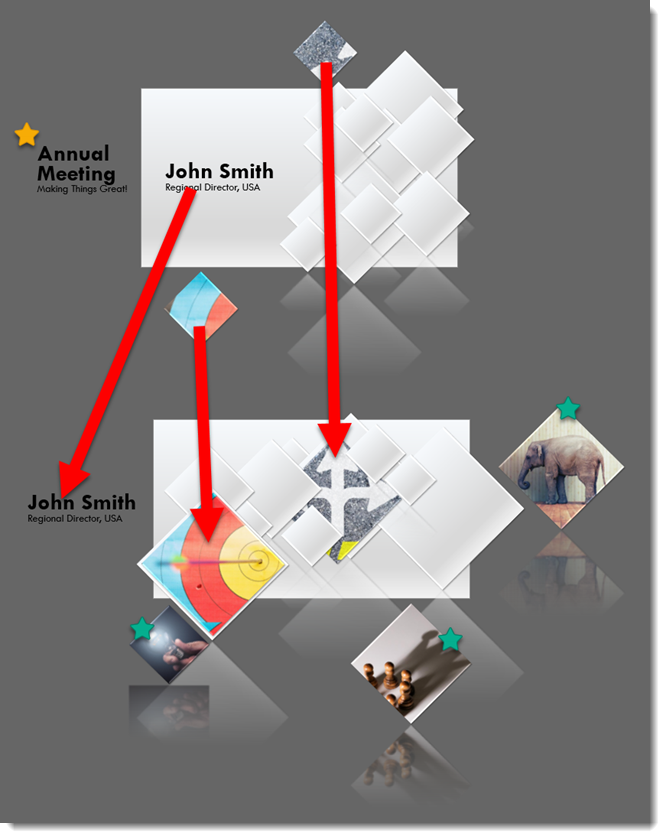 Just a bit of Thanksgiving fun in her spare time (thanks Christie!) with this PowerPoint animation creation!

Here is a look at the number of slides it took to create this masterpiece:

As part of a design studio wide project, everyone delved into Canva to develop their own version of a presentation, everyone working from the same 10 slide presentation outline. Canva had good features for presentation design which were intuitive to use, fast processing (Canva is a web-based app, and I was working on a 300mbps fiber optic connection, so a fast response time was expected), and capable software package.

Here is my presentation, developed entirely with Canva. Download the PDF version Here 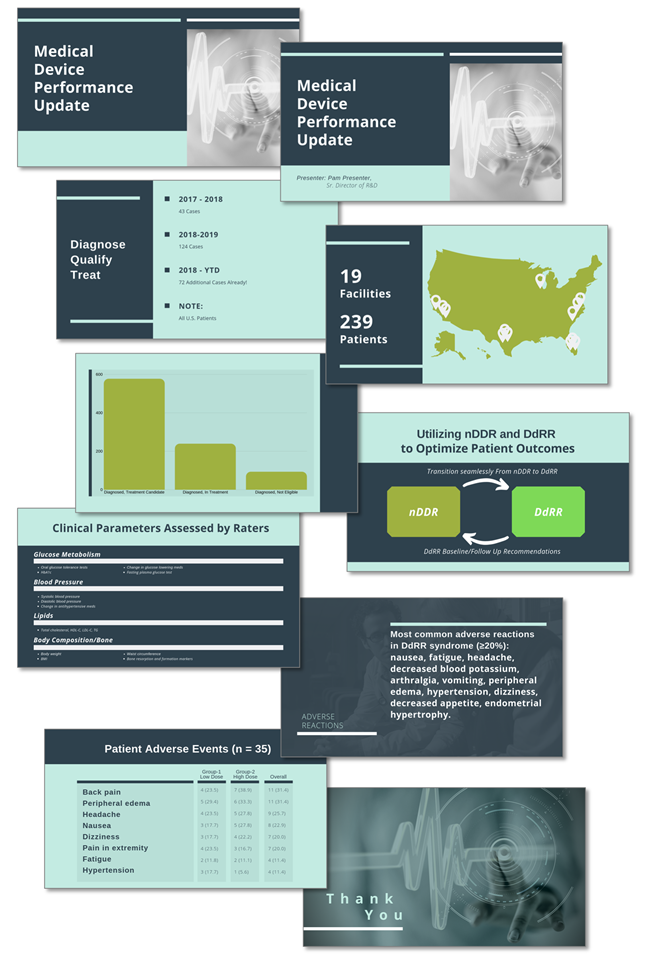 Comparing the presentation design workflow between Canva and PowerPoint (desktop version), I would prefer PowerPoint. Canva has a simple feature set and for a business presentation like this one, it was a source of frustration and lots of extended formatting. A few examples are:

On the praise side, the web-based Presenter View capability is really fantastic coding. The variety and depth of “templates” is very impressive (although they do not meet my definition of what a full template is). The variety of font options, color scheme options, and sharing options all are impressive.

I am certain the future will have requests for developing presentations in Canva and from this internal project, our design team is ready to take on those requests and develop professional slide decks.

To create the Memorial Day 2019 video was first about finding the art assets. 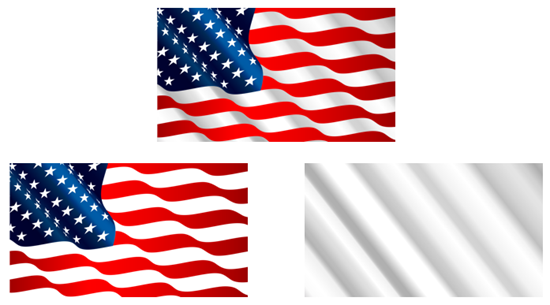 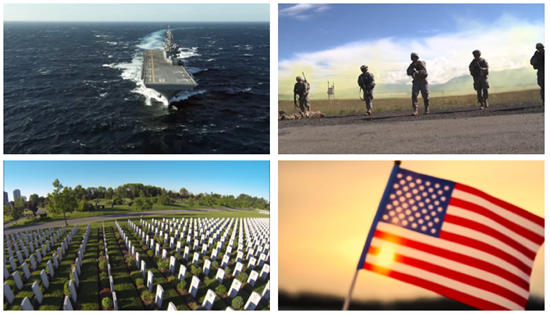 Setting the animation on the slide was simple, but did require a few rounds of revision.

1 For an additional layer of motion, the U.S. flag has a very slow, horizontal only, scaling. This slow animation was used as the duration for the overall video.

3. The second video fades in, on top of the first video that is still playing (goal is no static pauses) and starts playback at the same time.

4. Like videos 2-3-4, the third video is set to fade in and start playing just before the end of the previous video.

5. The duration of the fourth video was set to match the U.S. flag emphasis animation.

6. All 4 videos fade out just before the U.S. flag animation completes, leaving a static U.S. flag with white bands, where the white is actually the slide background color.

Done! All layout, video compositing, animation timing and export completed in PowerPoint (note: video from PowerPoint exported at 1280×720, 30 FPS with audio channel. The exported video then brought into Adobe Media Encoder to render a blog friendly under 12MB version).

An Ultrawide screen, in this case almost 60′ wide, needs a background that coordinates with the meeting and can be a nice background for the “standard” 16×9 presentations. For this meeting we sourced an image of Las Vegas (meeting location) and created a walk-in look adding the event logo and accent graphics.

Then for the background look used during the presentations we updated the same background image to be more subtle for the 16×9 presentation slides and live presenter IMAG camera (note: the event logo bug transitioned to their 2nd styling and seamlessly maintained same size and position as the full logo).

Even the world’s largest toy company needs to show it segmentation and brand portfolio. For this presentation we wanted visual consistency (vertical bars and all white logos), brand color coding (bottom block for logo), and large visuals to emphasis things are not small with these small toys! 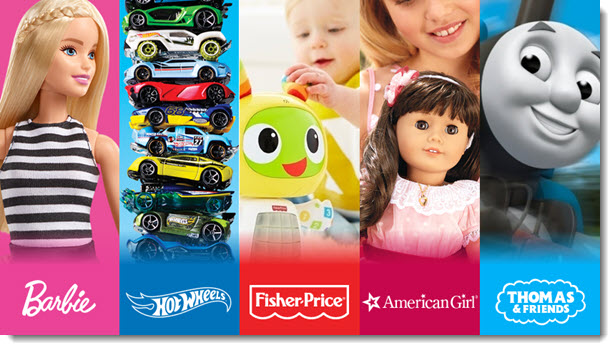 We could have completed this entire design in Adobe Photoshop or InDesign, but the layout is composited directly in PowerPoint. The bottom color blocks are PowerPoint shapes (with a gradient top edge) filled with colors from the brand style guide. The logos were all made white using PowerPoint’s brightness function. The brand images, while optimized in Photoshop, were sized and cropped in PowerPoint.

This is a portfolio piece, but not a design example. We work in PowerPoint a lot. And our live event projects often use presentations that are not the standard 16×9 setup. Our job as the design studio is to help the presenters understand the event staging and how their presentation will work. 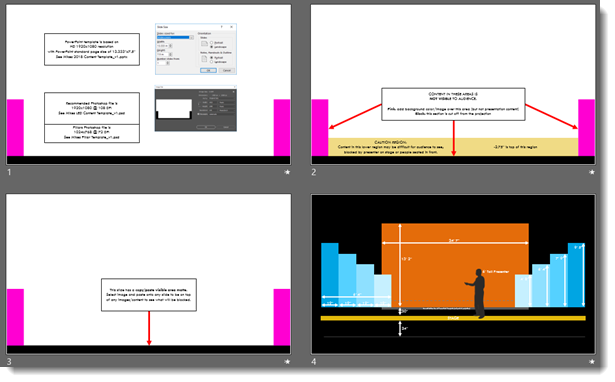 This is a few slides from a presentation to the presenters on how their presentation will work in the meeting space – yes, a presentation about the presentation. It is part staging, part technical information, and part about being aware of how slide content needs to be laid out to work with the staging and be best for the audience. 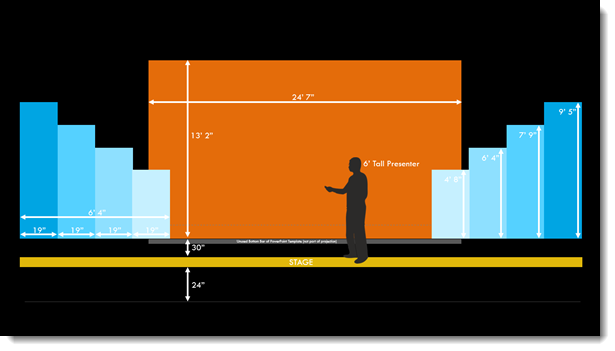 Just a peek behind the design and some of our client communication efforts.

Happy Thanksgiving everyone! Enjoy time with family and full of fun and food 🙂

Thanks to Christie on the TLC Creative presentation design team for creating a fun Thanksgiving themed PowerPoint animation – it only took 82 animations for the above animation!

Just a bit of Halloween fun in her spare time (thanks Christie!) with this animation creation! 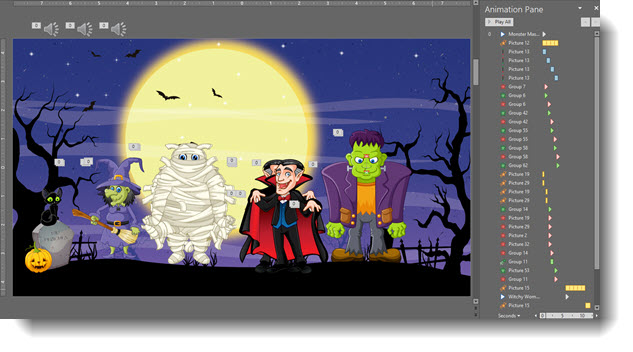 Sometimes a presentation project is just all about the animation. In this case we were tasked with developing a 2+ minute motion graphics video to be used as a meeting opener, a short segment is here for preview. We developed the video all in PowerPoint, exported to video with a music track. It is not the tool that creates bad, boring and bland presentations – PowerPoint is just a canvas, and can accomplish wonderful results in the hands of professional design team.